“An authentic meal should be just like those our grandmothers used to make, that’s the motto of this restaurant!”, the manager of the establishment told Susana Pereyra, the new cook. At that precise moment, Susana recalled that her grandmother couldn’t cook anything, not even hard-boiled eggs. When the boss asked her to prepare an old-fashioned pheasant stew, two large drops of sweat began rolling down her forehead. She gathered up all the ingredients she could think of and started preparing the stew with her eyes full of tears on what felt to be her last day on the job. All of a sudden, her Spanish grandma’s habitual saying came back to her: “Chorizo is fine when cooked with good wine.” Two hours later, after adding half a bottle of “Chateau Margaux Grand Cru” and three Iberian chorizos to the casserole, a deliciously irresistible aroma invaded the kitchen. The manager, who could not believe the extraordinary taste of Susana’s dish, said: “Congratulations, Miss Pereyra! I see that your grandmother was an outstanding cook.” 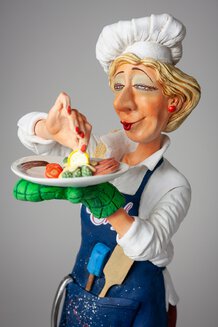